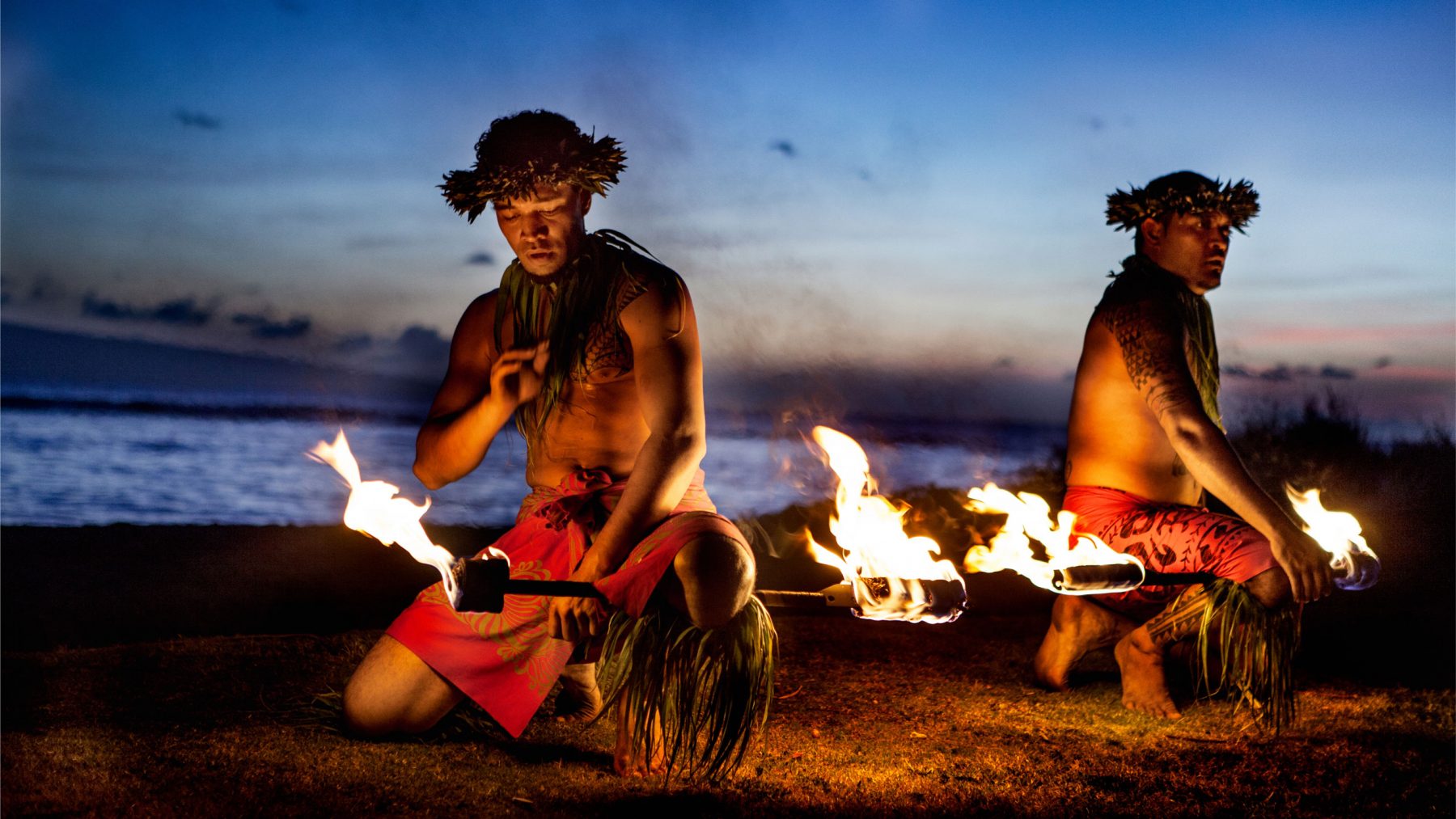 The Samoan Fire Knife Dance is a breathtaking performance that visitors often look forward to when attending a luau. However, there is a lot more to this ritual than just a spectacular dance as it comes from centuries of tradition and is infused with lots of old-time lore and even personalization by performers.

It’s important to mention, though, that the fire knife dance is not at all a Hawaiian dance, and therefore is NOT showcased at the Old Lāhainā Lūʻau because we’re committed to keeping our show truly traditional and accurate to our culture.

Where is the Fire Knife Dance from?

The Samoan fire knife dance originated in the South Pacific Island of Samoa and it was originally a war dance. The knife used in its performance even today is a traditional implementation of the ceremonial dances that came into prominence somewhere between 900 and 1200 AD, according to most Polynesian historians.

In ancient times, the dance consisted of warrior gestures of victory in battle being displayed using a nifo oti (translated as “deadly tooth”), which was a wooden hand-held sword or club with boar tusks or shark teeth used to maim or injure enemies.

The origin of the fire knife dance known today goes back to the ailao, which eventually became a traditional way for Samoan warriors to demonstrate their battle prowess with the performance of artful and complex movements. In its earliest days, this choreography was performed with a war club called anava, and some women —such as daughters of high chiefs— have been said to have taken part at some point.

As warfare faded and became history, the Samoan war dance survived and the nifo oti became an important element in the Samoan Taʻalolo or gift-giving procession that honors special guests. Custom now demands in most formal occasions that the ornately decorated manaia (or prince) and Taupo (or princess) should lead taʻalolo processions, each carrying and twirling the nifo oti. This all keeps the tradition alive.

Back in the day, the fire dance was also performed to rhythmic chants or songs, but today that tradition has been mostly replaced with vigorous drumming on a variety of ancient and modern instruments which contribute to its popularity with most modern travelers. It is an energizing spectacle to witness, especially when there are more risky variations added to the dance by each of the performers.

The knife dance as it is best known nowadays —also called Siva Afi (siva means dance and afi means fire) or Ailao Afi— combines complicated acrobatics with twirling metal knives covered with cotton towels that are set on fire during the performance.

Not many know that it was Uluao Letuli, a performer from American Samoa, who in 1946 added fire to the nifo oti. He is considered the father of the modern fire knife dance. He was also given the nickname “Freddie” because he could dance like Fred Astaire, so he had the skills needed to handle this new addition while keeping up the rest of the show. This revitalized the tradition and raised the bar for future performers.

The idea is said to have come to him while he was people-watching in San Francisco. Freddie was inspired by a Hindu fire eater and his baton-twirling daughter and decided to add fire to the knife dance routine. This dramatically increased the level of courage and skill required to perform an already difficult dance, making it even more impressive and compelling to watch. This new and exciting dance was an immediate hit, so Chief Letuli went on to perform it for many years after that.

Nowadays, the expectation of seeing fire knife dances in luaus comes from the close familial ties between Polynesian and Samoan tribes and some homogenization of these dances as part of many islands’ cultures, but that does not mean they are part of all of our authentic traditions.

Where Can Fire Knife Dances Be Enjoyed?

Fire knife dance is usually reserved for the spectacular finale of those luaus where they’re performed. It’s considered to add some sizzle to celebrations and because the tradition has been passed down for generations, it’s rare to see a dance performance that’s the same as another, keeping things interesting, no matter how many luaus someone attends.

There’s something about the combination of music, athletic skills, and the dance of fire that’s mesmerizing to most. And in some shows, they even add extra props to keep the audience on their toes.

We will be forever thankful to Freddie Letuli for his immense contribution to the exciting Samoan Fire knife dance tradition which can be enjoyed in other Polynesian shows while our maui luau continues its own tradition of presenting only an authentic Hawaiian luau for all visitors to enjoy.

Is There a Hawaiian Fire Knife Dance At All?

No, although the traditional Hawaiian Hula dance is often performed along with fire knife dances during tourist shows, fueling the confusion.

Both dances are significantly different, even more than most people expect, not only because of the movements and music, but also due to the very distinct origins and meanings.

While the fire knife dance is a war dance, the traditional Hula dance is believed to have begun as a worship ritual dance to recognize genealogy, honor ruling chiefs, and honor gods like Pelé, the goddess of fire. It is said that the goddess Laka is the keeper of the dance now and that explains why this is the name most often heard when speaking about modern Hula dancing, if you’ve heard about the history of tradition.

However, the definitive origins of the traditional hula dance are somewhat still disputed as there are several local legends depicting possible different origins. One thing is certain, though: They are all magical stories, just like the dance itself!

Hula wasn’t originally performed to entertain, but to preserve culture and stories. For this reason, unlike fire knife dancing, hula variations and modifications were discouraged and dancers were expected to teach it in the same way they had learned it themselves.

Additionally, not all Hula dances are created equal nowadays. There are two main types of Hula dance still performed today, which are the hula kahiko (the ancient) and the hula auana (the modern), and while they are very different, they are both stunningly beautiful and unique.

What are the traditional dances performed at Old Lahainā Lūʻau?

The Old Lahainā Lūʻau show includes traditional hula dance (kahiko), modern hula dance (auana), and Tahitian dances. There are usually multiple performances throughout the evening, so visitors can enjoy different styles, costumes, and stories told through dance. The Tahitian dance in the show recognizes the migration of the first Hawaiian settlers who came from the Marquesas and Society Islands. If it’s at the top of your list to see a fire knife dance show, be sure to confirm it will appear in the luau you are attending.

← What to wear to a Luau?
Imu Preparation for a Hawaiian Luau →

This site uses Akismet to reduce spam. Learn how your comment data is processed.